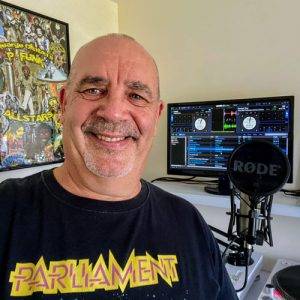 I started DJing in 1979 and had my first residency at a club in Bristol called The Turntable Club. Disappeared from the DJ scene to get married and do the family thing.
In 1998 started a retro funk night called “The Funk Mob”
Joined the DJ line up at Soul Train (Bristol) in 2002 and have been part of the DJ line up ever since.
After over 40 years still going strong on the Bristol Funk and Soul scene and regularly DJ at Soul City, Soul Train and Soul Club 22 in Bristol.

Have DJ’d in Ibiza, Marbella and Tenerife

Highlights include DJing at Funky Nation (upstairs at Ronnie Scotts, London), working alongside Roy Ayers and appeared at The Craig Charles Funk and Soul Show.

Radio presenter for over 12 years at stations