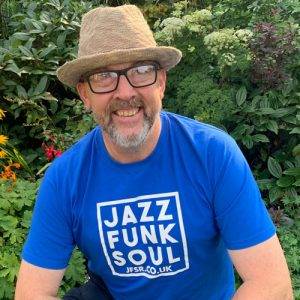 Wolverhampton born and bred but now exiled in The East Midlands and spreading the Black Country dialect to anyone who is brave enough to attempt to decipher what I’m saying!

I’ve been a Funkateer since 1974 when I first heard some “proper” Kool & The Gang – the track that really hit home being “Rated X” from the “Good Times” album. With Wolverhampton being something of a Northern Soul stronghold (the legendary Catacombs Club was based there) Funkateers were very much in the minority and we were regularly ridiculed for our drainpipe trousers and pointed shoes. Thankfully, we held firm and our numbers increased…..with just a little help from Dr. Funkenstein and the Disco boom, oh, and a certain man in a white suit.

I began my association with “our music’ as a collector initially (spending small fortunes in Pep’s Downtown Records; Ruby Red Records; Sundown Records and Graham Warr Records), but dabbled in DJ-ing at house parties and Wolverhampton’s Club Lafayette. Venue-wise, I regularly attended all-dayers at Manchester Ritz; Blackpool Mecca and Birmingham Locarno, and went to some great nightclubs too – Rafters (Manchester); Chaplin’s (Birmingham); Rum Runner (Birmingham) and Soul/Funk/Jazz-Funk nights at the aforementioned Club Lafayette. Early DJ influences would have been Colin Curtis; Graham Warr and Shaun Williams, but I did get to witness the likes of Chris Hill and Robbie Vincent when they ventured north. In pre-internet days, Blues & Soul magazine was my bible!!!!!

Artist-wise, I’ve always liked Kool & The Gang (pre-1979 though); Brass Construction; Earth, Wind & Fire; Kleeer; The Crusaders; Fatback/Fatback Band; Mandrill etc, and in amongst my favourite albums would be The Miracles’ “City Of Angels”; Undisputed Truth’s “Higher Than High” and Airto’s “Touching You, Touching Me”.

Away from music, I’ve spent a lifetime in cricket – both as a player and umpire. I am a lover of technology (Rega; Apple & Denon DJ); Adidas Originals and a fan of Wolverhampton Wanderers (Football) and Worcestershire (Cricket), and I enjoy walking and climbing in the more scenic areas of our magnificent islands.

I’ve been broadcasting for several years now, and after a three year tenure elsewhere, I’m honoured to bring my “Shifting Gears” show (and my accent/dialect) to JFSR!