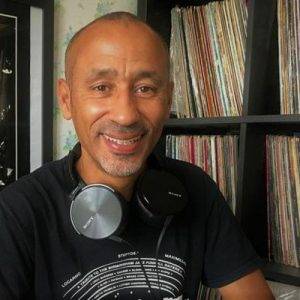 The Mexx
My first musical influence was my late father who used to travel the Jazz circuit in Birmingham as a
singer. My mother used to accompany him on occasion and sing alongside him; music was never too
far away in our home.
I bought my first vinyl record at the age of 13 in 1975 and since then I have been avidly seeking out
what I consider to be musical gems from a variety of genres to add to my ever-expanding collection.
I first understood the power and influence of dance music when I was stationed in Germany where I
frequented a number of Soul/R & B clubs along with American soldiers where the passion and
energy of the dance floor was quite simply breath-taking!
I started DJing whilst still in the Army at a venue in Northern Ireland and upon leaving the forces in
1983 I went on to form Birmingham’s first Strictly Soul Sound System called the Shiftwork Soul Crew
with two fellow DJ’s and, with a 3K rig, quickly earned a strong reputation for quality Soul, Jazz and
Funk. We frequently played at All Dayers, night clubs and house parties around the Midlands and
the South West.
My DJing career also includes time on 2 pirate radio stations in the mid to late 1980’s with the same
flavour of genres already mentioned.
Now I have reached my ‘3 rd Age’ I find that I have the time, energy and an enduring passion to again
deliver my unique style of classic and 21 st century Soul, R & B and Jazz Funk.
Im thrilled to be joining one of the best Soul music stations in the world – JFSR
~ Clive ~