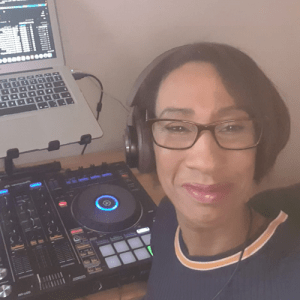 Men are always the ones known for buying music having a sound system or putting on events, but in Jenny Jazzylady’s household, it was her mother who
had regular parties giving her the opportunity to play the latest tunes. Following in her mother’s footsteps Jazzylady became an avid record collector
traveling great distances to hunt down that elusive album or track. In the eighties, Jazzylady attended a Solar Radio event at the Queens Hotel
in Crystal Palace when someone suggested it would be a good idea to do a show at the station. Jazzylady her best friend Judy and Steady Eddie drove
back to her house picked up some vinyl and headed back to the station where she performed her first-ever 2-hour secret broadcast on Solar Radio, not
secret anymore. Jazzy now had the bug for playing music and in 1992 she entered Gantons Best Female DJ of the Year competition to see if she could cut it as a DJ. Ron E Dee was the resident DJ and was responsible for preparing the contestants for the live DJ competition. Jazzylady realised she had a natural
flair for Dee Jaying and mixing, which she took to like a duck to water. The live shows were judged by Choice FM DJ’s Kirk Anthony and Merritt
Crawford. Jazzylady won Gantons Female DJ of the Year. She was the only DJ to mix, the Judges said technically she was the best and, musically her
selection was the best. She won a cup and a residency at Gantons in the West End.
Jazzylady then went onto become a resident DJ at Ricky’s Nightspot in Blackheath for 3 years and has played alongside a vast number of well-known
DJs and sound systems alike where she held her own. Jazzylady became well-known as the longest resident Female DJ with Remember The Times where she has performed countless times over 8 years and still makes special appearances as well as playing Festivals i.e. Sexy Festy Festival in Hoxton, Stockwell Festival and Croydon, had residencies in Motown Soul Bar, Catford, Lounge Bar, Streatham, Crystals, Crystal Palace,
East Dulwich Tavern, East Dulwich and The Cherry Tree Pub, East Dulwich and The Hamlet, Streatham.

In 2020 let’s see what’s ahead. Jazzylady has joined a new Station JFSR with
another Good Vibration Show which takes place every Friday afternoon from
2pm till 4pm. Exciting times ahead.